Andrew Leslie: Is Canada's Serial Exaggerator The Best Man for Minister of Defence? 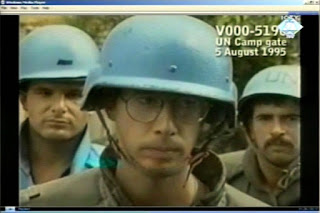 The Liberal Party win in Canada will result in a new Canadian government, to be formed by incoming Prime Minister Justin Trudeau.  Speculation is that Trudeau will name former Canadian General Andrew Leslie as his new Defence Minister.  This is the same Andrew Leslie who dishonored himself by misleading war crimes investigators in The Hague about what he witnessed in the town of Knin in Croatia in 1995 while he was a UN Peacekeeper there.  Leslie also misled the Canadian public about what he witnessed, telling the CBC in 2003 that Croatian Army artillery shelling in Knin in August 1995 had resulted in “between 10 and 25 thousand civilians dead.”  The war crimes tribunal ultimately could not identify a single civilian killed in the artillery fire.  Leslie was grossly exaggerating on CBC in order to paint himself as a brave soldier, following in the footsteps of his famous father and grandfather in the Canadian military.  Is this guy really the best that the Liberal Party can put forward for Minister of Defence?

Leslie’s exaggeration of the nature of the artillery fire in Knin was no accident. That exaggeration was intended to make Leslie appear courageous while out in the line of fire.  Indeed, Leslie schemed with his fellow Canadian officers in the Fall of 1995 to receive a Meritorious Service Medal from the Canadian Army, by creating a false story that Leslie had personally gone out into the town of Knin on 3 occasions and, while under intense Croatian Army artillery fire, saved the lives of 40 United Nations employees who were allegedly trapped in the town, by bringing them to safety inside of the United Nations camp in the town.

This story was a complete falsehood, but this report was written up by Leslie’s Canadian subordinates inside the United Nations compound and sent to Ottawa so that Leslie could be awarded a medal for his service in Croatia.  I know this to be the case.

In May 2007, I travelled to Ottawa to interview Canadian Army Lt. Col. Shawn Tymchuk, who in 1995 was then-Colonel Leslie’s assistant in Knin, Croatia (and also the Senior Liaison Officer for the United Nations Force in Knin).  Lt. Col Tymchuk told me that he was personally responsible for drafting all of the recommendations for Canadian medals that ultimately were sent to Ottawa for review.

I asked Tymchuck whether, as Leslie's assistant, he would have been aware of Leslie's whereabouts on 4 August 1995 in Knin, Croatia.  He answered, "Yes."   I then asked why he had written a recommendation for Col. Leslie to receive a medal. He responded that Col. Leslie had gone out into the town of Knin on three occasions on 4 August 1995, and while under heavy artillery fire had rescued UN personnel trapped in the town.

I then followed up with another question:  “How exactly do you know that Col. Leslie did that?”

His answer stunned me:  “I did not witness Col. Leslie going out into the town.  However, several weeks later, when I was writing up recommendations for medals, I was given a direct instruction from my superior (Canadian) General Alain Forand, to write it that way.  I had no reason to doubt General Forand’s version of events, even though I had not witnessed Col. Leslie going out into the town on 4 August.”

While under cross-examination in 2008 by our Defense team in the trial of Ante Gotovina before the International Criminal Tribunal for the former Yugoslavia in The Hague, Leslie admitted that he had never gone out into the town of Knin on the day in question, except for a very short trip where he never got out of the vehicle and never rescued anyone. He also admitted that he hadn't rescued anyone:

Transcript page 1958:
9 Q. General Leslie, did you travel outside the Sector South
10 headquarters compound on the 4th?
11 A. Yes, I did.
12 Q. And can you tell the Court on how many occasions and what the
13 nature of that travel was?
14 A. A couple times mounted; a couple of times dismounted. The
15 mounted were sometime shortly after 6.00 for a very short duration where,
16 in the controlled chaos, that was the front gate. There were some issues
17 with UN CIVPOL who were not necessarily on the same recall list as the
18 Sector South United Nations civil staff, and there was a demand for
19 someone who knew where a street was close to the train yard. So I hopped
20 aboard that vehicle, the duration of the trip was about 15 minutes,
21 nothing significant to report. Picked up three people, none of them UN
22 CIVPOL, and came back.
23 The second trip was at some point during the day. There was some
24 bodies outside to the right, and some people were interested in
25 investigating them and putting them in bags. So I just went outside to
Page 1959
1 put a stop to that.
2 Then that evening, I went to the Serbian army liaison detachment
3 to discuss some issues. To the best of my recollection, those were my
4 sojourns outside of Sector South compound on the 4th.

Leslie, by his own sworn testimony, never went out into the town to rescue the lives of 40 United Nations personnel.

Nevertheless, Tymchuk – on Forand’s instructions – wrote up a fictional account to his superiors in Ottawa which resulted in Leslie receiving a Meritorious Service Medal from the Canadian Army for something he had not done:

In 1995, Colonel Leslie provided outstanding leadership as Chief of Staff, Sector South Headquarters in Croatia. His professionalism and remarkable courage were clearly demonstrated between August 4 and 6, during Operation Storm -- the Croatian offensive in the Krajina district. During intense artillery fire, Colonel Leslie organized and participated in several missions to rescue approximately 40 United Nations employees trapped in their residences and bring them to the United Nations camp, using armoured personnel carriers. Throughout the worst of the shelling, he moved from bunker to bunker offering encouragement to those in distress and was instrumental in convincing them to continue doing their job. His performance during the operation and its aftermath saved many lives and brought great credit to the Canadian Forces.

While under cross-examination, Leslie attempted to justify the Medal by saying that he had approached the “vice chief of Defence staff and said, ‘I think you got it wrong. I think you're talking about 30 to 40 civilians from the hospital being moved to the UN compound.’ And after a bit of discussion he told me, ‘That's good enough. It's going to stay because you're going it for that, you're getting it for being the Chief of Staff duties.’ “[1]

The Vice-Chief of Defense Staff in 1996 when Leslie was awarded the medal was Vice Admiral Larry E. Murray, CM CMM CD.  It would be wonderful to see if Vice Admiral Murray would confirm Leslie's claims.  I doubt it.  Leslie himself was the source of false claims that he had travelled through Knin under shellfire.  As evidenced by the trial transcript in the Gotovina case,  Leslie had told war crimes investigators in 1997 that he had travelled through Knin on three occasions on 4 August 1995 and had personally witnessed intense shellfire. At trial under cross-examination, he admitted that this 1997 testimony to war crimes investigators was not true:

5 Q. General, you did say in 1997 that you personally witnessed these
6 on three occasions during trips through Knin during the shell fire;
7 didn't you say that?
8 A. Sir, I did. However, as I pointed out in my previous testimony,
9 only rarely did I see a point of detonation. The vast majority of shells
10 which I witnessed were either through oral or the smoke and glass of dust
11 cloud.
12 Q. Now, did you also explain to the Office of the Prosecutor when
13 you gave that statement that, in fact, you never took three trips through
14 Knin during the shell fire.
15 JUDGE ORIE: Stop.
16 You may answer the question.
17 THE WITNESS: Sir, I'd have to refer to that, but may I say that
18 the testimony I gave in 1995 was taken away and sent back to me. There
19 are some variances and inaccuracies in that testimony, which I'm more
20 than willing to admit to, and certain nuancing and wording that I did not
21 pay enough attention to when I actually signed it two years later.
22 I believe I was thinking at the time that one of those trips,
23 especially the one on the evening of the 4th, that there was almost no
24 shell fire and certainly not along the route.

Accordingly, Leslie was personally involved in spreading the myth that he had gone out into the town under heavy artillery fire.  It was a lie, a lie that he must have known had been told to Lt. Col. Tymchuk so that Tymchuk could write it up and send it to Ottawa for Leslie to be medalled.

Finally, recall what I said at the outset:  Leslie told a CBC audience in 2003 that the Croatian artillery fire had caused an estimated “10 to 25,000 civilians dead” in Knin.  (Transcript of Leslie’s 2003 CBC interview is available here, see page 2)

Yet in his sworn testimony in The Hague, Leslie claimed that he only saw between 30 and 60 dead bodies in total:

8 JUDGE ORIE: Mr. Tieger, could we ask the witness "large
9 quantities of dead, men, women, and children, stacked in the
10 hospital ..." What do I have to understand approximately by large
11 quantities? Where you are saying "30 to 40 patients, 25 in absolutely
12 critical condition," what about the dead bodies.
13 THE WITNESS: Sir, it's very difficult to estimate. I would say
14 the number was no lower than 30 and probably no higher than 50 or 60.
15 JUDGE ORIE: Yes. In the tens of?
16 THE WITNESS: Yes, sir.
17 JUDGE ORIE: Please proceed.

However, even Leslie's claim of seeing 30 to 60 bodies proved to be untrue.  Ultimately, the Tribunal could not identify a single victim of Croatian artillery fire. (See Gotovina Trial Judgment, at paragraphs 1360-1364, found here).

In short, Andrew Leslie is a man who has difficulty telling the truth.  He is a serial exaggerator who was given a medal by the Canadian Army under false pretenses.